I saw that saying^^^ on some guy’s t-shirt on the train and it made me laugh.
So far, I haven’t noticed being more hungry than normal (well from the running at least). I most definitely eat more because I know I need the energy and I should probably eat more carbs (which I haven’t really done and felt sluggish during yesterday’s run).
However, Monday began Restaurant Week in NYC. And it’s taking real willpower NOT to make a reservation for everyday of RW (which btw is really 3 weeks). I eat mostly healthy during the week but it’s the weekends that kill me – especially when I go home upstate and my parents cook me all the pork spare ribs, chicken, and hot dogs I want! Yes, I’ve had all of that numerous times this weekend. However, I don’t really buy and cook meat all that often (read: too expensive, too time consuming)
Workout this past week:
Monday – vinyasa yoga
Tuesday – despite being crazy sore from yoga on Monday, we ran 4x hill repeats in Prospect Park – surprisingly not as bad as I had expected (why only 4? Well if you know the park, you know how LONNNNGGGGG their largest hill is so basically it’s a never ending hill). Anyways, I felt good throughout it.
Wednesday – mat pilates

Ahhh how did that get there?! Doesn’t help my coworkers keep bags of candy around & I’m prone to stress eating!
Friday – complete and total rest day!
Saturday – 9.1 miles? It was supposed to be 10miles but the planned route the training group was supposed to run was blocked off in the middle of it. A tree fell on this guy! I saw the tree later on in my run, and holy crap it was a huge tree that looked healthy. They were also cleaning up all the blood as well since there was a 5k starting right where it happened. 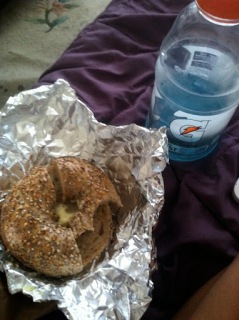 Went upstate after the morning’s run for the weekend, blueberry picking time! 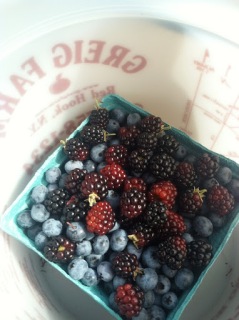 So delicious and fresh! 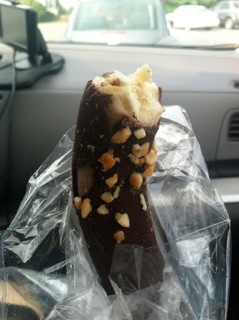 Post blueberry picking frozen banana! Kinda healthy right?
Sunday-nada – it’s been I got all dressed up to go running and I didn’t realize it was pouring out. It’s currently still raining. However, it wasn’t raining during brunch – go figure. 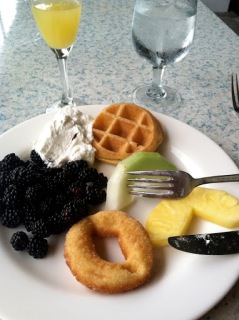 Unlimited breakfast brunch buffet – this is how I do “healthy” 😉

View from the restaurant
My running homework this week was supposed to be 3 additional runs for a total mileage of between 9-18miles outside of the training group workouts….which I definitely did not do. I think I needed my legs to rest a bit. Those hill repeats killed my legs for the rest of the week.
Lastly, the training program I’m following calls for 2 20milers. I’ve seen beginner marathon training programs online and they all call for one 20 miler.