Third time is not a charm.  Both this year’s NYC Half and today’s Brooklyn Half were my third time doing each race and the third time was my slowest times of of the 3.  My PR is from this race from 2 years ago and spoiler alert: I came no where close to it.

As I mentioned in my last post, I ran to the expo from my office in the Financial District over the Brooklyn Bridge to the Brooklyn waterfront on Wednesday. It was super windy and cloudy and there weren’t any product vendors (except New Balance) so I left.

I came back the next day and hung out for a few hours.  I went to Exceed at 6pm with one of my favorite instructors, Marianna, then went to the expo with my law school classmate Gloria. The bands were really awesome and I ate this massive arepa. The expo felt less like an actual race expo and more like Smorgasbord with music. There were so many delicious food vendors.

I haven’t been so social with my law school classmates this whole year because 1) when is there actual time to talk to people? 2) there is too much work to do. However, my classmate, who is also a doctor, decided to throw a party after finals, which happened to be right before the Brooklyn Half.  I said I wouldn’t drink but he had this party catered and there was a bartender pouring any hard liquor you wanted. So needless to say, I had a delicious drink. Maybe Malibu & pineapple before a race isn’t the greatest idea but still…

I only had one drink but my sister had 3 drinks plus a jello shot (Spoiler alert: she ended up running her fastest half-marathon time to date and NOW her PR is faster than mine…nooooo #competitive). We ended back in my apartment around 12:30am.
The morning of the race
The goal was to leave the apartment at 6:30am since the sister and I were both in wave 2. Nope, didn’t happen, I think we left around 6:50. Got to the security line around 7:15am and got THROUGH security right around 7:40ish.
Dear NYRR, THIS IS NOT OKAY.  I understand the need for security but it was such a hot mess that it really seemed like a bigger hazard and hassle than anything else.

By the time we got to the corrals, we weren’t even allowed into ours because it was too late.  Got yelled at a lot but we snuck into our right corral.

I started with my sister but before the first mile she actually ran away from me. I felt really good the first 3 miles but was getting really hot.  But the clouds starting coming, then it started sprinkling. I saw my friend, Gloria at mile 3 since she was volunteering at the water station.

By mile 4, it started full-on raining. At one point, it was coming down heavy, which I really didn’t mind because it was hot.  By the time I left Prospect Park (mile 7), it had stopped raining and I still felt really good.
Since it stopped raining, I finally realized that running with wet socks is a disaster.  I had to stop a few times the last 6 miles because I could feel the blisters coming. Although I still bled through the back of my socks on my right ankle.
Overall, I felt good and strong. I was substantially slower the last half than the first but I had a better mindset this race than say…last year’s race.  The time wasn’t the best but I felt good so good in fact, I’m pretty sure I was singing out loud at one point. 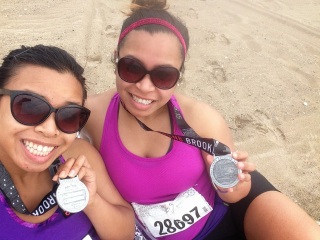 By the end of the race in Coney Island, the sun was out and we made it to the beach. I had to jump over a fence to do so and had security yelling at me but it’s all good. I sprinted away and some guy yelled “the race is over!” which I thought was just hilarious.

I hate this course because the course is boring (it’s especially bad the last 6 miles) but I do love the pre-party expo by the waterfront and the post-party in the stadium. Just like last year, we stayed until they kicked us out of the stadium.  Again, they had some bands playing during the after-party.
This year the lines for everything were crazy long. Last year wasn’t as nuts but apparently there were 26,000 finishers for this race.  For example, I waited for 30 minutes for HOT DOGS. I know what you’re thinking and yes, I agree that I have awesome priorities.
Did you run the race? What’s your favorite part of the race experience? The race, the expo, the after party?