The title is fitting for a number of reasons but mostly because the signage during the hydration stations were (alcoholic) drinking related (i.e. last call, it’s never too early to drink, happy hour related etc.).

A lot of rest days happened this week, I was feeling exhausted this whole week. Then it started to get worse as the week progressed. The heat also didn’t help.

Got up at 6am for a mini brick! Legs were really tired. Spent the evening after work, at a legal event then a restaurant opening. I said I wouldn’t drink this week but I did (hey the drinks were free!). I only sipped a bit from two drinks because I wanted to try their signature cocktails.

I went out to Rockaway Beach with my friends for a 9am yoga class, which meant I was out the door at 7:45am. I heard about Yoga on the Rocks from Outdoorfest and my friend Sarah, who runs OF. She wrote this awesome post from a few weeks ago so I needed to check them out.

It was such a great workout and absolutely perfect weather to do yoga on the beach. Despite how busy it got later, it was mostly quiet during our workout. All you could hear was the beach. Luckily the workout was slow vinyasa which I really needed.

I haven’t been to Rockaway Beach since immediately after Sandy. It has the feel of a small beach town without the crowds (think opposite of Coney Island or Brighton Beach). There are ton of great food around.  One place I went to had great egg sandwiches with avocado and tomato and another one had a delicious breakfast burrito (I love eggs if you couldn’t figure it out).

After going home to charge my phone, I went up to the race expo to pick up my packet and attend the race briefing, which was held all the way in midtown at the Hilton on 6th Ave and 54th St.

I heard this was a “good” race expo (i.e. decent vendors and snacks).  Initially I thought it was too small but there were a ton of samples. 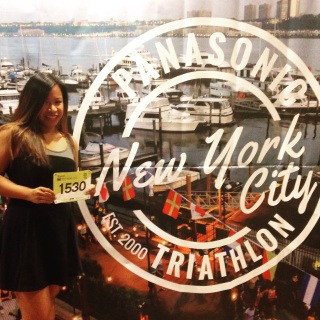 The race briefing was informative but it made me freakout more than calm me down. Like the fact that I didn’t realize there was no hydration on the bike portion and it was going to be 90 degrees on race day. I was already very dehydrated.  I ended up buying a water bottle holder for my bike from Paragon Sports who had a bunch of things on sale at the expo. 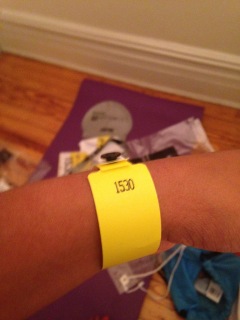 After the race briefing, they stamp your hand as you leave so you can get your race packet.  I got my race packet and they had to put the race bracelet on my hand, which had my number on it. The packet had

After that I picked up my shirt and goodie bag, which had a ton of samples inside plus discounts to Bicycle Habitat, plus the two large clear plastic bags that I could bring into transition. Plus a smaller clear bag for bag drop off at the start.

My alarm was set for 6am (just because I’d be waking up at 3:30am the next day). I woke up at 6 but couldn’t get myself out of bed. I was already so tired (not good) but I finally got out of bed around 9:30. I got around to the bike store to pump my tires (little did I know that I could have done it at bike drop off that afternoon). Because the race packet had a bunch of discount codes in it, I got 20% off a few things at Bicycle Habitat like tubes and CO2 packs.

After that I biked to the pool, swam for 10 minutes and got out. Finally stopping by the apartment grabbing all my stuff and heading to the bike transition.

Because the NYC Tri is so large, there are two transition areas, yellow is mostly women, elites and pros and some men (age groups 40-44 & over 50).  The red transition is all dudes except the Clydesdale women (over 165lbs+). Transition areas are heavy security areas that are fenced in with bike racks.

When I got to transition, I was greeted by an @$$hole. When they mean you have to dump all your stuff out of your bag into the clear security bag, they mean it. I had a ton of stuff with me, sneakers, wetsuit, towel, etc. He grabbed the mesh, not see through part of my bag and like “this isn’t empty, YOU HAVE TO EMPTY IT!” All of the bags, minus sneakers and that one mesh part he pulled were empty. The mesh part had tampons in it. WTF? He literally threw the bag at me while I was holding 2 huge plastic bags and my bike.  The other security guy was more low key and was like whatever when I had to go through again.

After the tour, I ended up walking the mile to the start from the transition area and walking back. Around the swim start, I must have looked frazzled. Some random older man asked if was my first NYC tri. He only replied “wow” when I said first NYC Tri and first tri ever.  He proceeded to give me all the tips about the swim.

After walking another mile down to 79th street, I got on the subway for dinner at Bareburger but stopped at the Running Co. to buy a hydration pack (i.e. a Camelbac). Best purchase ever made.

I got home before 9 and couldn’t believe I had spent most of Friday night and Saturday prepping for the race. I finally put my race tats on then set my alarm for 3:30am and went to bed around 9:45am but I don’t think I fell asleep for at least a half-hour.

One thought on “NYC Triathlon: Part I – the Pre-Game”