My last final of the spring semester was two weeks ago! It oddly coincided with week 9 of Brooklyn Half Training. When I started law school in August 2014, I started with a full-time job while doing school on the side. Needless to say I hadn’t taken a break of sorts in 2 years. I was always juggling something else (i.e. I might be off from school but I still had a full-time job).

So I appreciate the time off way more now.  And to some level, I’ve been living it up.  Here’s my list of things I’ve done for the first time EVER in the past two weeks.

1.) Trapeze! – It’s terrifying and I’m pretty sure you can hear me screaming in the video below.  Laughing Cow (yes, the cheese!) threw an awesome event on May 10 at the Trapeze School of New York. They launched a new product called Cheese Dippers and luckily I was able to attend the event!

As terrifying as it felt, it’s actually pretty safe (if you listen to all their cues).  There were three instructors right by the trapeze area. One on the platform who sets you up, one by the ladder and one that calls out the cues on the ground (who also can control the speed at which you are flying).  I only did it twice that night but it was so much fun.  Admittedly, my hands were still shaking well after doing it for the last time but I would so do it again!

2.) Actually leave the country – The last time I actually used my passport and left the US was in 2010! So shocking. I need to travel more! The boyfriend and I booked this trip to St. Lucia only a few weeks ago. I realized that it was the only extended break I would have until December so we had to take advantage.  It was amazing, gorgeous and very hot. Despite spending my last week of Brooklyn Half training on vacation, we did a ton of active things like a 4 hour hike, kayaking and snorkeling!

3.) Snorkeling! – Because the UV index was at 10 (out of 10) the day we went to the beach, we decided to delay kayaking for a few hours and go snorkeling instead. I was hesitant to try it because adjusting my breathing takes me some time (reasons why I hated running for as long as I did).   Eventually I got the hang of it and it was so much fun. There are a ton of gorgeous fish in St. Lucia. Lots of colorful blue and yellow ones.

4.) Cover myself in mud – I mean, who does this?! We went to Sulphur Springs Park for a “drive-in volcano” where the volcano is still active and bubbling. It’s very cool. Nearby the volcano, you can put on some volcanic mud which is good for the skin given all the minerals in it.  (Yes, my skin did feel very soft after). 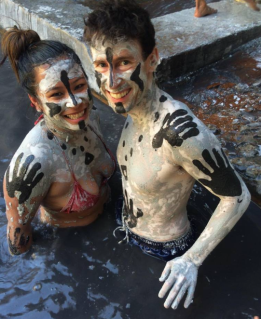 5.) Skip a half-marathon – I got back last Friday night from St. Lucia around 9pm. Threw my clothes into the washer and went out to get dinner. I was fine when I went to bed but when I woke up at 6:15am, I had a terrible stomach ache. I felt hungover and out of it (but I hadn’t had alcohol in days). My sister and my roommate left without me around 7am for the start line (we live about a mile away) and I stayed on the couch.  Eventually I went back to bed but I felt really guilty about skipping. I’ve never DNS a race. It’s a weird feeling but eventually I was okay with it. Guess half-marathon #19 will have to wait.
I don’t start my summer internship until June 3 or summer classes until June 2 so I’m trying to fill up my time with museums and outings and workouts until then! Any recommendations for things I should absolutely do in NYC?